Since turning pro in 2009, Rickie Fowler has been a top ambassador for both Cobra and Puma Golf and Apparel. After the most consistent year in his career in 2017, when he won the Honda Classic and had ten top 10 finishes, Rickie extended his contract with Cobra and Puma in early 2018.

If things continue going this direction and he continues to play at a high level, I think its safe to say Rickie with be representing Cobra for many years to come.

Fowler has always had style that stands out on the PGA tour. Most notably is his typical Sunday attire when he wears his all-orange outfit.

Coupled with his relentless energy and charisma on the course, the all-orange attire surely draws looks from both fans and foes.

By “foes” I’m referring to persons whom may not be that into the color orange. It is widely know that Rickie is considered one of the nicest guys on the PGA Tour, so I highly doubt there are many haters.

Ok so enough of messing around, lets get to what’s in Rick’s Bag. Note that most professionals have each club finely customized to there exact specifications such as height, swing style, etc.

Nonetheless, here is what Rick’s caddie and lifelong friend, Joe Skovron, carries around during each round.

For the big stick Rickie rocks the Cobra King F9 Speedback Driver. Note that the Cobra F9 Series for both Driver and Fairways Woods are not available to the public until 1/18/19.

Rickie opts for using the 10.5 degree in the 9 degree setting with a Graphite Design Tour AD IZ-7x Shaft.

As for his fairway woods he rolls with 2. The first is the King F9 Speedback Fairway 3-Wood. The King F9 3-Wood has the same shaft as his driver.

The second wood in the bag is the King F8+ Fairway Wood with an 18.5 degree loft. The shaft is an Aldila Synergy 70 Shaft at 40.5 inch length.

Rickie goes with the forged irons rather than the traditional cast irons due to better launch trajectory, accuracy, and overall workability and consistency. Last but certainly not least, Rickie, like most pros on the PGA Tour, uses a protoype Scotty Cameron Newport 2. 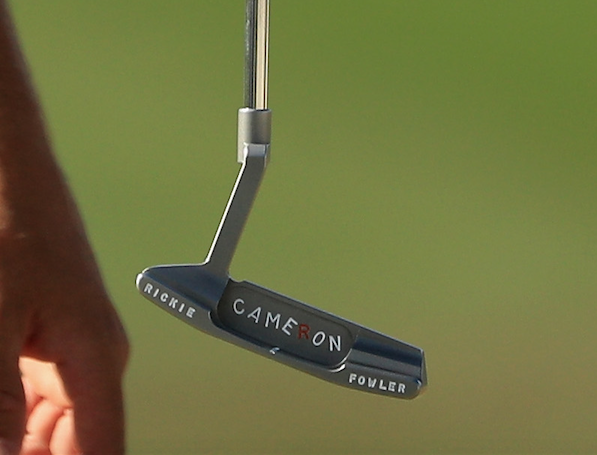 Now you know what the kids got in his bag. If you have a few more minutes check out what another Cobra Golf Ambassabor, Bryson DeChambeau, has in his bag!